Homosexuality Was Not A Criminal Offence In Africa – Bisi Alimi Says

Homosexuality Was Not A Criminal Offence In Africa – Bisi Alimi Says

Bisi Alimi has said that homosexuality was not a crime in Africa until the colonizers came and introduced Christianity.

The gay rights activist added that one cannot demand for decolonization of Africa while also being against homosexuality.

History 101; not one single African was a Christian before encounter with the colonisers. Homosexuality was not a criminal offence in Africa before the colonisers came. You can’t demand decolinising Africa and be homophobic at same time. Choose a side. 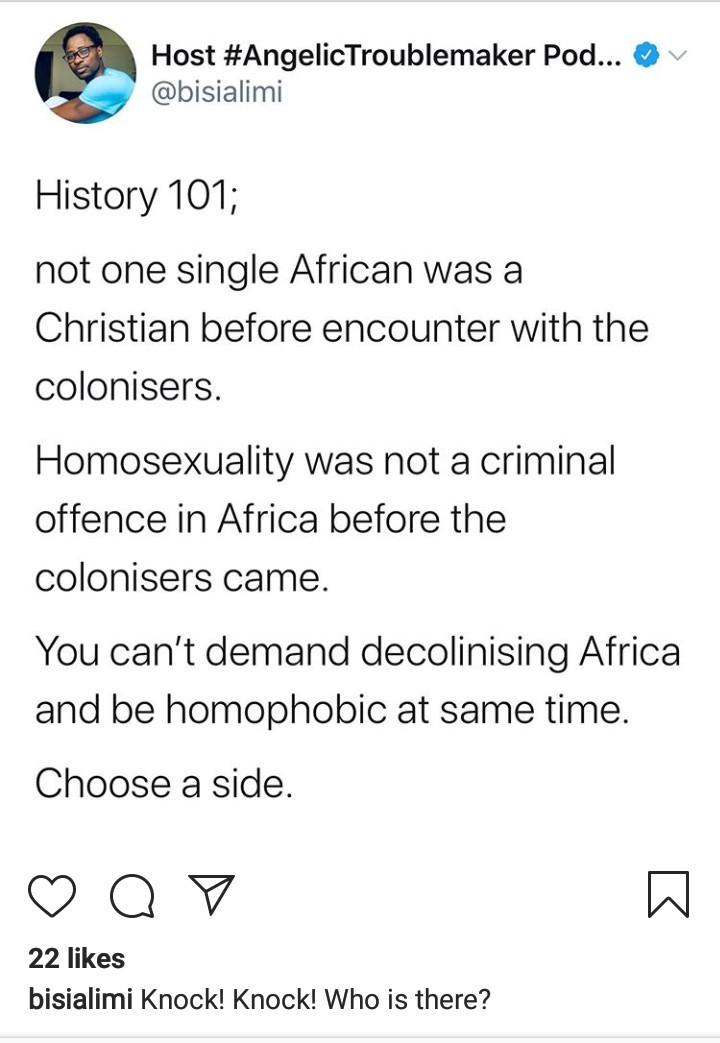 In another story, Nollywood veteran gives a detailed analysis of why homosexuality is caused by the ‘Ogbanje’ spirit.

In a video that has now gone viral, Edochie revealed that homosexuality starts when a child reincarnates as the opposite s*x and starts finding the same s*x sexually attractive.

“If a child is born and that child is very sickly and the child dies and the father says this child looks like an Ogbanje and that there is a possibility that the child will come back he gives the child a mark and then buries the child,” he said.

“Maybe a few years after another child is born, and the child comes out without the mark, how will you explain it? See it as reincarnation.

“A lady can get so fond of her friend and then dies, she would want to be part of that family so she can get very close to her. Instead of being born as a woman, she gets born as a man.

“But remember that the spirit that got into that pregnancy is that of a woman and now manifest as a man. When he sees a man, he is attracted to her, you know why? Because the spirit in him is a woman’s spirit. Very few people can tell you this,” he concluded.

EXPOSED!: I Caught My Husband Sleeping With Church Members

JUST IN: Babcock Senior Beats Up Fresher Over Slippers (Video)

Two Lovers Found D**d Inside Their Residence In Delta