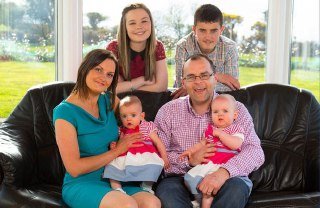 Ever seen twins 87 days apart? Amy and Katie are twin girls born 87days apart with Amy coming four months earlier than Katie who arrived three months later. Their mum Marie narrates the bitter-sweet experience this was for her.

Their birth is recorded as Guinness World Record for the “longest interval between the birth of twins”. The previous record is 84 days.

Doctors have told Maria and husband, Chris, they have achieved the medical equivalent of winning the lottery, with both girls surviving and healthy.

Maria, who has two other children says she has never felt her world torn in-between for three straight months, her twins both hanging in the balance, clinging to existence.

“I call the girls our little miracles,” she said. “As I held Amy for the first time I stroked my bump and prayed to God. I just wanted my girls to be together and safe and well.

Maria, 34, and Chris – a psychiatric nurse at the hospital where the babies were born – had been thrilled to ­discover she was expecting twin girls at her first scan at seven weeks.

Maria said: “I always felt I was going to have twins – even when I found out I was pregnant Chris said ‘that’ll be twins, then’ as they run in the family. The pregnancy went smoothly until Maria got to 23 weeks and five days.

She narrated: “I felt unwell at work with extreme pressure on my abdomen but I thought that must be normal as I was having twins. But I was worried enough to get an appointment with my GP who told me to go straight to hospital.

“To my horror when I got there just hours later my waters broke. I was ­immediately admitted.” Maria was then dealt the devastating blow of being told that she was in labour and both her babies could die. She said: “The doctors told me there was very little hope of them surviving as they were so premature. I willed my babies to fight for life. I prayed to God, day and night, asking him for a miracle.”Amy was born at just 1lb 3oz, she was dangerously small. Maria said: “Amy was rushed to intensive care. I was exhausted but it wasn’t over – there was another child and so I had to focus”

The doctors tried to induce the second baby to come out to no avail, until maria and husband decided to allow nature take its course.

As there was desperate worry over unborn Katie, there was still concern for tiny Amy. It was four days before Maria could even see her.

Maria said: “I burst into tears when I saw her in the incubator – she was just so, so tiny and vulnerable. She was covered in tubes. All I could see was her mass of black hair.

“I touched my bump and made the vow I would get Katie out safe and well and the girls would be together.” Maria visited Amy in intensive care every day, while praying that Katie would survive in her womb. It was five weeks before Maria was allowed to hold Amy.

“Amy was fighting for life in an incubator and Katie was struggling to survive in my womb. It was the hardest three months of our lives. But Chris kept saying, ‘Where there’s life there’s hope.’” Maria said: “I made up my mind I wouldn’t leave hospital unless it was with both my girls.

Every day Maria was on a knife edge waiting for the second twin to arrive safely. “I knew I could go into labour at any moment,” she said.

“The doctors said we just had to wait but every day was a bonus. I viewed it as a mission to take the pregnancy on as far as I possibly could. There was no room for negative thoughts. And as the weeks passed the tiny life growing inside me got stronger.”

Maria was finally induced on August 27 at 36 weeks and three days, after doctors decided it was safe. She gave birth to Katie, who weighed 5lbs 10oz, after just over an hour.

She said: “ When they put Katie in my arms she smiled at me and the nurse said ‘she’s fine’. We both cried.

“What immediately struck us was that Amy takes after my side of the family and Katie takes after Chris’s.

“Two hours later we reunited the twins. Amy was still in her incubator and they put Katie’s cot beside it.

“The nurse took Katie and put her in the incubator, facing her sister as they slept and Amy immediately smiled. There was no doubt that they recognised each other.”

Chris said: “I never lost hope even in the darkest moments. The medical team did an incredible job.”

Maria added: “I’m so honoured to have had these two girls that are so special. For all of us to be here, could I be any luckier?”

Guinness World Records spokesman Damian Field said: “If the claim of 87 days between the birth of the twins is substantiated they will break the world record.”

Consultant obstetrician Dr. Eddie O’Donnell at Waterford Regional Hospital was in charge of the delivery team and ­described the births as “extraordinary”.

He said: “In medical terms to have both babies and mum come through this healthy and happy is the medical equivalent of a lottery win.

“Generally when a woman begins delivering twins, the uterus contracts and expels both babies within an hour. But Maria’s uterus stopped contracting and Katie was left in the womb.

“At first we began to induce Katie’s birth but Maria’s uterus stopped contacting – a rare event – so we decided it was safer for Katie to stay where she was and let nature take its course.

“We took an educated decision here as both babies were so small but Katie had more of a fighting chance staying put.

“However, it was not without some risk for Maria and Katie of potential life-threatening­ ­infection. Both were constantly monitored by medical staff.

“But the flip side is every day still inside the womb makes a big difference in terms of survival for a baby of that age. And in Katie’s case this paid off.

“We are delighted for the whole family and couldn’t be happier we were able to play a part in their miraculous birth.”

Dr Animitra Das, the consultant pediatrician in charge of the team that cared for premature Amy, added: “I’ve never come across any set of twins born so far apart – it is extraordinary.

“At first our concern was that Amy was so premature there was a 35 to 40 percent chance of long-term problems – from ­learning ­disability to blindness, deafness and cerebral palsy.

“She was on the cusp of survival. And she had an extremely low birth weight. She had a stormy period, but she pulled through.

“When Katie was born I looked after her for a short while and she told me, ‘I don’t need your help.’ She left the unit the next day with her mum. The team is thrilled and delighted.” Addressing The “Poverty And Injustice Faced By Widows

Tanko Yakasai Reveals Those Behind Call For Census Postponement

BREAKING: Police Disperse Sowore, Others With Bullets At Abuja Court