Things To Do If You Have A Crush On Someone

Serie A: We Have Missed Osimhen – Gattuso Reveals

UPDATE: Nigerian Man Who Threw Grandson From Fourth Floor In Malaysia, May Have Mental Issues

Things To Do If You Have A Crush On Someone

by AnaedoOnline
in Relationship
0

Having a crush is one thing but knowing what to do to gain your crush’s attention is another. The fact that most of us don’t know what to do when we have a crush is one of the reasons why they never lead to anything.

There could be a number of factors responsible for not being able to catch your crush’s attention but these tips below can help in changing that narrative especially if they like you back.

Build up your courage 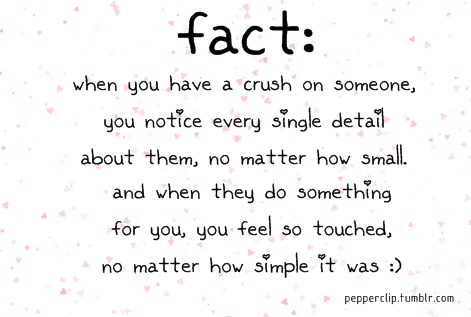 Instead of lurking in your fantasies of what could be, you could simply work up your courage and talk to them. At least with this, you will know if you stand a chance with them or not.

Don’t be shy to slide into the DMs If your it is someone you know online or you are simply too shy to face them physically, you can always rely on social media. From a corny joke to a witty saying, you can start a rapport with your crush and develop something

Don’t look away quickly if you and your crush happen to pass by each other. Maintain eye contact with him or her from across the room until they break and ask you what exactly it is you want. Ensure you aren’t creepy with this though because staring unnecessarily can be considered ill-mannered.

Play the role of the secret admirer

You are already a secret admirer so why not take on the role? If your crush happens to be the romantic type from observation, you can decide to play into this role.

Every romantic likes a secret admirer so do things like leaving them sweet messages when they aren’t looking. The occasional gifts, letters or romantic gestures set the pace for where you are heading.

Should I Go Through My Partner’s Phone?

How To Make Your Relationship Last

Questions You Should Ask Before You End A Relationship

Lady Weeps Uncontrollably After Been Dumped By Boyfriend (Video)