CAN Writes Buhari Over Level of Insecurity… 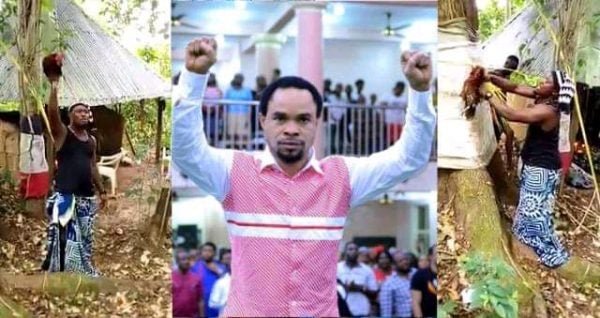 A native doctor of Arondizuogu, Imo state and some elders in the village have gathered to perform a ritual to curse controversial Anambra prophet, Chukwuemeka Ohanemere popularly known as Odumeje.

The prophet had been in the news for allegedly speaking against the late herbalist Pericoma and the people of Arondizuogu.

In the video, Villagers and elders can be seen sitting at the big shrine while the Native doctor performs Rituals against the Man of God using their native language.

“Order The Arrest Of Odumeje Now” – HURIWA To CBN

The native Doctor called on all their gods to come out and fight prophet Odumeje for condemning it.

He further accused prophet Odumeje of getting his power from India, adding that he cannot get his power from a foreign land and test in their Own Land.

The native doctor then went further to slaughter a fowl which he claimed had been invoked with the spirit of the prophet.

In Another Story Murder-Suicide: Man Kills Dad, Then Himself, Leaves A Note Written In Blood

When the world is battling the effect of coronavirus both on humanity and on economy, a very sad story was reported, where a man reportedly killed his dad and then himself at their family home in a ‘murder-suicide’ during the coronavirus lockdown.

Nicholas Mooney, who is understood to have suffered mental health problems, allegedly wrote notes in blood and on an iPad in an attempt to explain what had happened

The 23-year-old is believed to have stabbed his father, James, 60, to death before using the knife to k**l himself.

Officers from Police Scotland found the notes as well as blood around the £300,000 home in Ralston, Paisley, on Thursday last week.

An area around the house was cordoned off by police as forensic personnel collected evidence.

Sources told the Record officers faced a scene of horror when they first arrived to investigate the incident.

One source said: “It was a murder-suicide – and it’s an absolute tragedy. There were notes written in blood in the house. Nicholas stabbed his dad and then killed himself. He left a bloody note… where they found him. The note said something like, ‘It’s nothing to do with anybody else’.

“When police arrived, there was nothing needing to be investigated – it was spelled out for them in blood what had happened.

“But they had to follow protocols and carry out a proper investigation, just to be on the safe side. It really is a tragedy – two lives taken and a family obliterated,” the source added.

Almajirai: The Shame Of Northern Elites

Ex-BBNaija Housemates With Greatest fan base

Echezona obinnaJuly 22, 2022
Another great offer for you

Northern CAN Urge Buhari To Face His Responsibility Over Insecurity

Be Like Osinbajo, Amaechi, Stop Complaining – Sule Lamido to Wike