Cesc Fàbregas Reveals The Best Moments Of His Career

Cesc Fàbregas Reveals The Best Moments Of His Career

Cesc Fàbregas is one of those players who leaves you feeling fortunate to have been blessed with the opportunity to watch him play. The Spaniard is a real magician with the ball.

With the kind of creativity that he possesses, it should come as no surprise to hear that Fàbregas has enjoyed an outstanding career which has brought silverware, records and plenty of outstanding performances on the biggest stages.

Here are 11 of the best moments of Fàbregas’ illustrious career.

When Fàbregas moved to Arsenal in September 2003, he didn’t really bring any hopes of making an immediate impact. He was more bothered about making a long-term impact. So when Arsène Wenger gave him his debut just one month later, it came as somewhat of a surprise.

In a 1-1 draw with Rotherham in the League Cup in October 2003, Fàbregas became the youngest player in Arsenal history at the age of just 16 years and 177 days.

It’s a record which still stands to this day, and the first of many milestones which the Spaniard made his own throughout his career.

By the time September 2006 arrived, Fàbregas was a regular in the Arsenal squad, and performances like the one he put in in a 1-0 win at Manchester United that month were exactly why.

Throughout the entire game, he was his typically creative self, but it took Fàbregas until the 86th minute to find a breakthrough. Robbing Cristiano Ronaldo of possession in midfield, the Spaniard weaved his way through United’s defence before threading a perfect ball through for Emmanuel Adebayor to find the back of the net.

Thierry Henry was left out of the team through injury, so Arsenal needed someone else to step up and lead them to victory. Fortunately for the Gunners, Fàbregas was ready to rise to the challenge.

The 2-0 win over AC Milan at San Siro in March 2008 could well be Fàbregas’ best performance in an Arsenal shirt.

The Spaniard cleared a shot off the line early on while the Gunners were still finding their rhythm, but as soon as Fàbregas got on the ball, it became clear that it was going to be his night. He was mesmeric throughout, dominating Kaká in the midfield battle.

Fàbregas saw a shot crash off the bar before the break and could have easily created one or two goals shortly after, but he again had to wait until late on.

With 84 minutes on the clock, Fàbregas picked up the ball from deep and waltzed towards goal, before unleashing a strike from all of 30 yards which sailed into the bottom corner, capping off what was an utterly outstanding performance.

If you know anything about Fàbregas, it’ll be the fact that he is an outstanding passer who can create a goal out of nothing, and there was no better example of that than Arsenal’s 6-2 win over Blackburn Rovers in October 2009. By the time he left the pitch after 76 minutes, Arsenal were 5-2 up, and Fàbregas had been involved in all five.

He set up Thomas Vermaelen, Robin van Persie and Andrey Arshavin all in the first half, before adding a stunning goal of his own after the break. Fàbregas controlled the ball and unleashed a ferocious volley from outside the box which left Paul Robinson helpless.

One final assist for Theo Walcott followed, before Wenger showed mercy on Blackburn and brought Fàbregas off to a rapturous applause. He could have easily had ten assists but had to settle for a record-equalling four.

Winning the Battle for North London

Tottenham Hotspur were adamant that they had what it took to become north London’s best team in October 2009, but Fàbregas made sure to remind them of how the hierarchy worked back then.

Van Persie opened the scoring shortly before the break, but Fàbregas needed just seconds to add a second as he ran through Spurs’ defence and fired past Heurelho Gomes to give Arsenal an emphatic lead at the break.

The Dutchman bagged a third and took the plaudits in the 3-0 win, but Fàbregas’ influence did not go ignored. Because of him, Arsenal dominated the midfield battle and kept north London red for at least a few more years.

Given the embarrassment of riches in Spain’s midfield, Fàbregas didn’t always get the opportunities he perhaps deserved at international level, and he actually started the 2010 World Cup final against the Netherlands on the bench behind Xavi, Andrés Iniesta, Xabi Alonso and Sergio Busquets. How’s that for squad depth?

He entered the game in the 87th minute when the score was still tied at 0-0 and gave Spain some fresh legs for extra time.

It was Fàbregas’ pass in the 116th minute which found Iniesta unmarked in the box, and the Barcelona man fired home to seal the glory for Spain.

Having come through the Barcelona academy, Fàbregas took the long route to the first team, but finally managed to win La Liga in the 2012/13 season.

Playing in the false nine role which he popularised in the modern era, Fàbregas ended the season with 14 goals and 14 assists in all competitions as Barcelona. This season also included one of his most dominant performances in Spain – a 5-0 win over RCD Mallorca in which he bagged three goals (the first hat-trick of his career) and two assists.

It was his first league title victory, but it definitely was not his last.

Chelsea fans were excited to see Fàbregas in action following his near-£30m move from Barcelona, and it was the perfect start for the Spaniard as he picked Burnley apart on his debut.

He bagged two assists in a 3-1 victory, but let’s just take a moment to talk about his first – that pass to André Schürrle. It was a perfect, first-time volley which cut Burnley apart and dropped perfectly at the onrushing Schürrle’s feet. The kind of thing you don’t even seen it video games because it’s too perfect.

A simple corner earned Fàbregas his second assist, but he could have easily retired after that first one. His Chelsea legacy was already complete.

Having missed out on the Premier League title during his eight years with Arsenal, Fàbregas finally got his hands on the elusive trophy during his first season at Stamford Bridge.

He ended the campaign with 19 league assists, but perhaps his most important contribution came in April’s 1-0 victory over Queens Park Rangers, in which Fàbregas bagged an 88th-minute winner which all but confirmed Chelsea‘s status as title winners.

On the day before his 28th birthday, Chelsea’s glory was confirmed with a 1-0 win over Crystal Palace, and Fàbregas’ status as a Premier League legend was official. 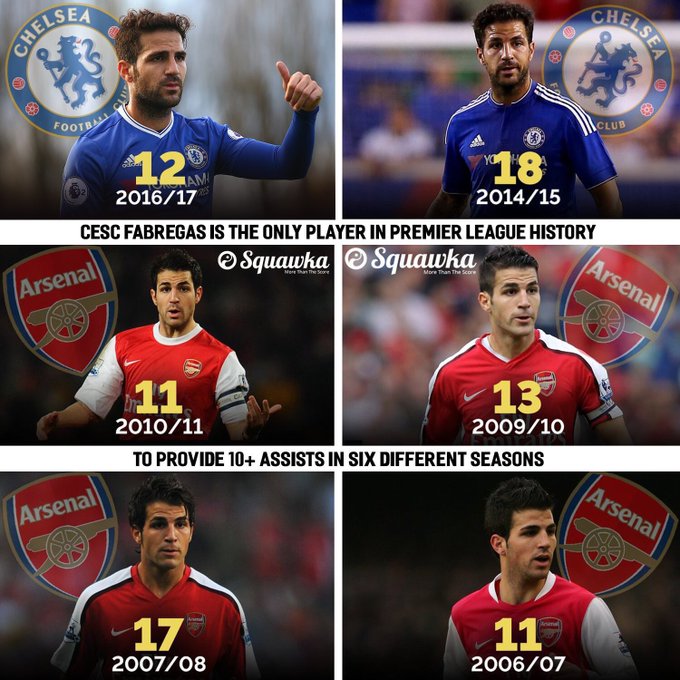 Had Fàbregas spent his entire career in England, he likely would have shattered the Premier League’s assist record. He managed 111 in his 13 years in England, but the honour is saved for Ryan Giggs, who created 162 goals during his 22 seasons in the division.

However, what Fàbregas does have over his rivals is the fact that he reached 100 assists in the competition faster than anyone else. He needed just 293 appearances to reach the milestone, compared to Giggs’ 367.

There’s a reason why Chelsea fans will tell you Fàbregas is magic.

We all know just how good of a footballer Fàbregas is, but he showed his outstanding character as a person when he offered to defer four months of his wages to support the Monaco staff during the coronavirus outbreak.

He also offered to top up the wages of any staff who had faced pay cuts because of the pandemic, despite not receiving any salary himself.

Fàbregas assists people on the pitch and he is more than happy to do the same away from football. What a guy.

EPL: Chambers Talks About His Experience After Long Injury

Serie A: FA Intensify Talks With Govt Over League Resumption

Premier League Is back: Gets 3pm Live Transmission

Alex Iwobi Reveals Why He Snubbed England To Represent Nigeria