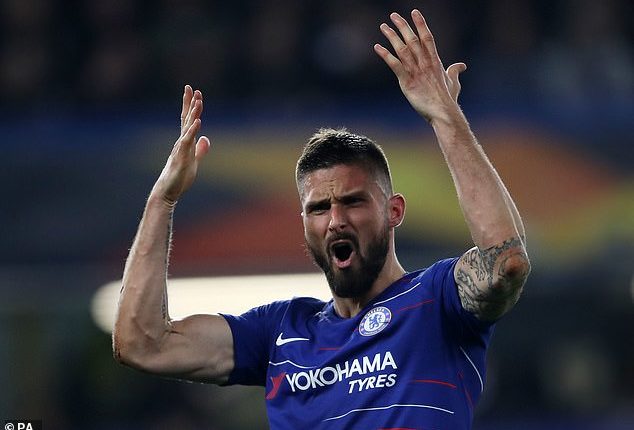 Tuttosport claims that Giroud and Inter are ready to finalise a deal that will take him to Serie A for next season.

Giroud wants more playing time as he looks to make the France squad for the European Championships that will take place next summer.

His Chelsea deal runs out this summer, so Inter boss Antonio Conte can bring him to Italy on a free transfer.

The 33-year-old was linked to Inter in January, but a deal did not materialize.

And with the Blues reportedly no closer to offering the World Cup winner an extension at Stamford Bridge, he would be available for nothing in the summer.

Read Also: Lampard Opens Up On His Biggest Challenge As Chelsea Coach

According to Gazzetta in Italy, Lazio are keen to make a move for the Frenchman. Giroud was close to a transfer away from West London in the January transfer window.

Tottenham and Inter Milan were both interested in signing the Blues frontman who was deemed surplus to requirements before playing a key role in recent matches due to Tammy Abraham’s injury.

And Giroud confirmed Lazio were another side who wanted him during the winter with the report adding this could be used as an advantage when trying to negotiate again in the summer with plenty of clubs no doubt scrambling for his signature.

After the 4-0 win over Everton, in which he scored his second Premier League goal of the season, he told Telefoot: “Even I saw myself elsewhere, to be honest. I went through six complicated months.

“That’s why I tried to leave in January. I did everything [to leave]. In the end, with the circumstances, Chelsea did not want to let me go. The crucial condition for my departure was to have a replacement.

“The most interesting club for me was Inter. The problem is that it dragged on.

“In the end, and even if Lazio were there towards the end and Tottenham too, it was no longer a question of where I was going to leave but could I leave. There was nothing to do. I was stuck.

“I knew that anyway I shouldn’t start going on strike or wreak havoc in the locker room. First of all, because it is not me and also because I knew there was a good chance that I would stay at Chelsea.

“That’s why I stayed flawless and professional until the end.

“There were two reactions: either I mope around or I fight for my place. That’s what I did. And the coach who promised me more opportunities to play kept his word and I took my chance.”

As well as Giroud, Lazio are also reportedly looking at Giacomo Bonaventura.

The midfielder, 30, is also on course to become a free agent when the season finishes as his deal at AC Milan expires.

He has played 17 top-flight matches in Italy this season, scoring twice.

Gazzetta add that negotiations are in a very early stage for the player they were keen to sign from Atalanta in 2014 and is rediscovering his top form following knee surgery last term.

Arsenal vs Leicester City: Updates On The Game