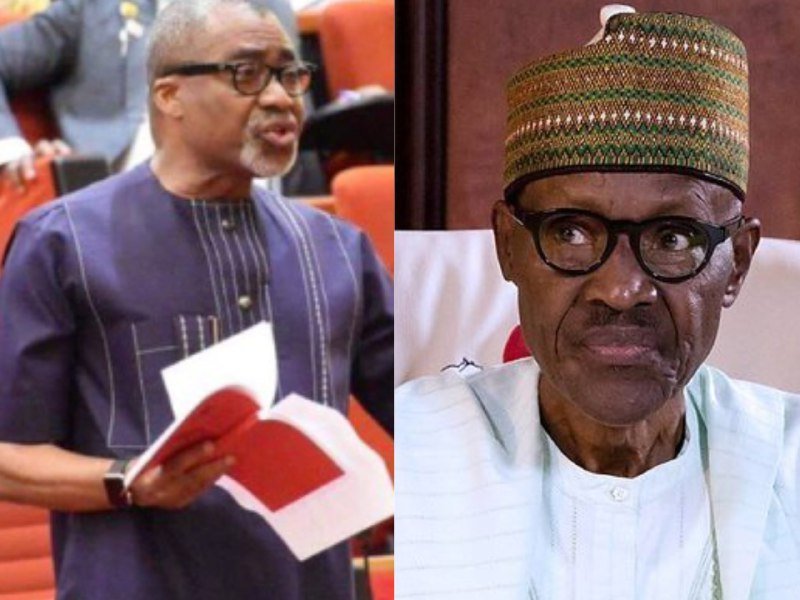 A few hours after the Senate Minority leader, Senator Enyinnaya Abaribe called for the immediate resignation of President Muhammadu Buhari following the escalating security challenges in the country, the hashtag “#BuhariResign” is currently the number one trending topic on Nigerian Twitter as Nigerians are reacting to the call.

Senator Enyinnanya Abaribe representing Abia South senatorial district made the call during plenary on Wednesday when the red chamber was discussing challenges bordering on national security.

The Peoples Democratic Party (PDP) lawmaker and the Minority leader of the red chamber, Senator Abaribe was the first to tender his contribution during the motion.
READ ALSO: Just In: Resign Over Insecurity – Abaribe Urges Buhari

“If you want to treat an issue, you go to the head. We did not appoint the IG or the security chiefs. We will go to the president and ask him to resign,” Abaribe said before being interrupted by the Senate President, Ahmad Lawan.

Mr. Lawan asked his colleague to make his contribution without attacking the president.

“Nigerians voted APC because they promised to tackle insecurity but they have failed,” the opposition lawmaker, Abaribe added before being attacked again by the Senate President and other members of the red chamber.

On Tuesday, Mr. Buhari claimed he is surprised that Boko Haram terrorists were still existing despite claims by his administration that the terror group has been decimated.

The hashtag #Buhariresign has garnered over 21,000 tweets at the time of filing this report.

See some comments below.

Senator Abaribe said "This government said if they didn't perform Nigerians should stone, so we are ready to stone this govt….Those who live by propaganda must die by propaganda"

So he called on the govt headed by @MBuhari to resign. #BuhariResignpic.twitter.com/D1N6Yp3ta4

Who are those people trending this hashtag #BuhariResign it doesn’t make any sense are you people not tired, you all started this year with another round of online stupidity, trending an hashtag that won’t work out. if y’all are really concerned about this government march to Aso

Buhari should resign and give way to competent hand. We can’t continue recording killings like this everyday.#MrUnaware #BuhariResign pic.twitter.com/wkS6EORQDZ

The question we are supposed to be asking is,where should we gather to stone them,the APC people.

Before he became President,we were only battling Boko Haram.