Former BBNaija reality TV star, Uriel has cautioned married men to leave her alone so she can find a fellow single guy to hook up with.

In a post she shared on Instastories, she stated that the reason why she doesn’t want to give in to married men is that she doesn’t want a situation where she would have to be on the lookout for the married man’s wife when she’s out with him.  Read an excerpt from her instastories below

Pls if you are married STOP ASKING ME OUT. ALLOW Me to be a Singlet na with other singlets so we go jam for traffic a Marry. Ah Ah, How can I be chilling with someone’s investment..when we are eating we are both doing Athletics in the name of Hiding?? Its a lie I can’t run ooo. I get plenty of weight. I want singlet 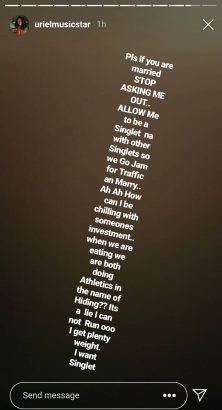 In another news, some Lagos s*x workers have revealed why married men love to patronize them. According to one of the s*x worker who identified herself as Jennifer, she said:

Even though I used to collect good money from them, I still pity them as their wives were not taking care of their emotional needs at home.