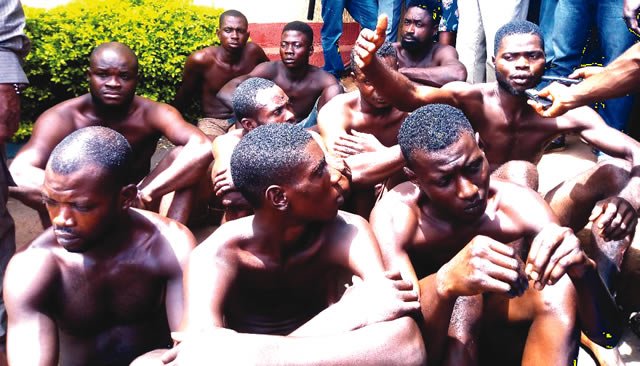 The Ebonyi State Police Command said on Saturday that it had arrested 11 suspects allegedly involved in various criminal activities, including murder and cultism.

The Commissioner of Police, Awoshola Awotunde, told journalists in Abakaliki that seven out of the 11 suspects attacked one Friday Irem, 30, in the Umuezali-Orizor community, Ezza North Local Government Area of the state and inflicted several machete cuts on him before abandoning him in a pool of blood.

He said police personnel attached to the Operation Puff Adder had upon receiving the information moved to the scene, rushed the victim to the Alex Ekwueme Federal University Teaching Hospital, Abakaliki, where he was confirmed dead.

READ ALSO: Editorial: How Biafra Will Crash In One Month

According to him, the victim’s corpse was later deposited in the mortuary of the hospital for autopsy.

Awotunde added that the operatives subsequently launched a manhunt for the fleeing suspects, which led to their arrest and the recovery of three cutlasses and two axes from them.

The CP also said during a reprisal attack by a rival cult, one Alegu Ifeanyi, aka Bruno, was traced and murdered at the Onueke community in the Ezza South Local Government Area of the state.

He added that the victim’s corpse was recovered and deposited in the mortuary of the same hospital, pointing out that the perpetrators, who were later identified to be members of the Aye/Vikings Confraternity, had been arrested.

He identified the suspects as Igwe Uchenna, Chukwu Eusebius, Usulor Augustine, and Ugama Sunday, adding that the 11 suspected cultists would be arraigned in court soon.

Awotunde stated, “On May 31, 2019, one Friday Irem, 30, was attacked by a group of dreaded cultists/bandits, who invaded his residence in Umuezali-Orizor, attacked and inflicted several machete cuts on him and abandoned him in the pool of his own blood.

“On June 1, 2019, in a reprisal by a rival cult, one Ifeanyi Alegu, aka Bruno, was traced and murdered in the Onueke community. The perpetrators, who were later identified to be members of the Aye/Vikings Confraternity, were equally arrested.”