The event held in Awka, the state capital, attracted executive members and supporters of the All Progressive Grand Alliance (APGA), political appointees, members of the Victor Umeh Campaign Organization, youths and women groups.

While presenting the tricycles to the beneficiaries, Senator Umeh said that they were part of the 2017 constituency allowances due for supply in 2018; adding that the tricycles were a fulfilment of his electoral promise that anything due for his senatorial zone will not get missing.

He also noted that the tricycles were to support youths, who have no strong means of livelihood; stating also that in January 2019, women in Anambra Central will enjoy their own empowerment packages, whereby they will benefit from N50 million microcredit to set up meaningful ventures.

Umeh, who also revealed that he has attracted N700 million worth of projects to his senatorial zone within the short time he spent at the Senate, added that he has a total of 40 physical projects to be executed in 2019 within communities in the zone.

He further clarified that all the people benefiting from his schemes are being carefully selected to reflect all the local governments and communities within the zone.

Earlier in his opening remarks, the chairman of Victor Umeh Campaign Organization, Prince Emeka Udodeme, commended the senator for his magnanimity in empowering youths, men and women of his senatorial zone.

Prince Udodeme, former President General of Oraukwu Community in Idemili North LGA, recounted how Umeh, within a space of ten months at the Senate, has set the red chambers charged with motions and bills.

He noted that besides Umeh’s strides at the Senate, the lawmaker has also done so much to uplift the economic and educational wellbeing of the people he represents.

According to him, “Senator Victor Umeh has done a lot for the people he represents in just a short time.

“Just last Monday, the senator dolled out N10 million for 70 indigent students carefully selected from Anambra Central senatorial zone, who smiled home with N100,000 each to help them take care of their school fees for the coming academic session.

“Again, just recently, Senator Umeh sponsored the training of 151 persons from the senatorial zone on special skills. The senator has also made arrangements for the participants to benefit from CBN loans that will enable them to set up independent businesses”.

He called on the people to give their unalloyed support to the senator, especially during the coming election; stating that “one good term, deserves another”.

Some of the beneficiaries, Eze Innocent Chibuzor, Nonso Ezeudu and Obiora Okoye, expressed their joy over Sen. Umeh’s benevolence and assured him of their prayers and support. 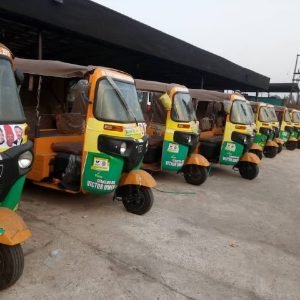