The Campaign for Democracy, CD, yesterday called on the federal government as a matter of urgency, to declare a state of emergency on federal roads in the South-East, South-South and South West regions. 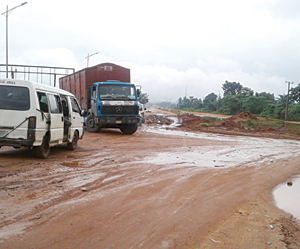 CD said these roads have become death traps to the users and grave embarrassment to Nigeria especially, the people of the zones affected. The organisation said: “Some of the roads are Enugu-Port Harcourt road; Enugu-Onitsha road; Onitsha-Owerri road; Owerri-Porthacourt road; Nnewi- Amichi-Akokwa-Orlu road; Orlu-Arondizuogu- Okigwe road; Ihiala-Orlu-Umuahia road; and Enugu-Abakiliki road. “Others are 9th Mile Corner- Opi- Makurdi road; Onitsha-Adani- Nsukka road; Agbor-Auchi-Okene yet to be completed road; East-West road; Onitsha-Benin -Lagos Expressway and ever busy Benin-Ore-Sagamu-Lagos road and many other roads in the south-west too numerous to mention.”

The human rights group made the call in a statement it issued in Onitsha, Anambra State, through its national publicity secretary, Dede Uzor A. Uzor after its emergency meeting in Enugu State. According to the group, “the situation of these roads have become intolerable and embarrassing to Nigeria, the people and even the All Progressives Congress, APC, led government of President Muhammadu Buhari.

“All the federal roads in the three zones of South East, South-South and South-West are in a deplorable state. They have turned to death traps and people are dying on daily basis in these roads due to accidents. “The recent palliative work on the Onitsha -Enugu expressway and Onitsha-Oba- Owerri road was too haphazard to make any serious impact. “We therefore demand that federal government should immediately commence the rehabilitation of the roads before February 2019 general elections.

“Sometimes we are tempted to wonder what the Minister of Works, Housing and Power, has been doing to improve on the situation of the roads, but on the other hand, we understand his work is too much for one person to handle. “CD therefore calls for immediate splitting and separation into three of the Ministry of Works, Housing and Power and appointment of competent Nigerians to head each of them.”